Belle Meade Plantation With 5,400 acres, Belle Meade was a prominent stud farm and nursery in the horse industry until its sale in 1904. Beginning as a two story Federal style home constructed in the 1820s, the house was altered in 1853 with an addition and Greek revival facade. 110 Leake Avenue. Open M-Sa 9-5, Su 11-5, admission fee. Historic marker

Carl Van Vechten Gallery Fisk University. Originally functioning as a gymnasium, the first on an African-American university campus, this building was completed in 1888. It was renovated to house the art collection given by Georgia O”Keefe. 18th Avenue North and Jackson Street. Academic Year (Aug 14 – May 7): Open Tu-Sa 10-5, Summer (May 7 – Aug 14): Open M-Fr 10-5, admission fee. Historic marker.

Country Music Hall of Fame The Hall of Fame opened in 1967. It is operated by the Country Music Foundation, which also operates RCA”s historic studio B, which can be toured by museum visitors at no extra charge. 4 Music Square East. Open Nov-Apr: M-Su 9-5; May-Sept: F-Sa 8-6, admission fee.

The Hermitage The home of President Andrew Jackson, this house has been restored to the period of his retirement (1837-45). The site also contains the original log Hermitage, Jackson”s tomb, and the mansion garden. 4580 Rachel”s Lane. Open M-Su 9-5, admission fee. Historic marker.

The Parthenon A full-scale representation of the Athenian Parthenon was built for the 1897 Centennial Exposition. After falling into decay, it was rebuilt in reinforced concrete between 1920 and 1931. Inside is a 42-foot high statue of Athena. Centennial Park. Open T-Sa 9-4:30, Su 12:30-4:30 (1 Apr – 30 Sept. only) admission fee. Historic marker. 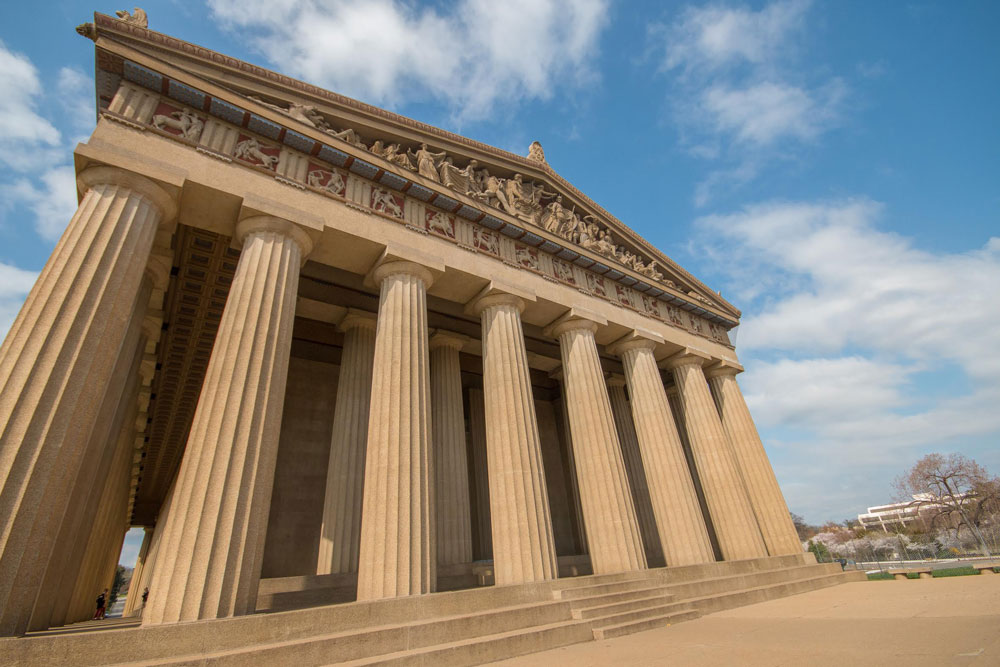 Ryman Auditorium A prominent Nashville landmark that was at one time dubbed the “Carnegie Hall of the South” and housed the Grand Ole Opry(R) from 1943 – 1974. Originally built as the Union Gospel Tabernacle in 1892, it was then renamed to Ryman Auditorium in honor of Tom Ryman who was responsible for its construction. In 1994, an $8.5 million renovation project restored this National Historic Landmark back to its original splendor. 116 5th Ave North, Nashville. Open 9-4 Daily, admission fee.

Tennessee State Museum Starting from prehistoric Native American and continuing up to the New Deal, the museum has exhibits on all periods of Tennessee History. There is also Military Branch located in the War Memorial Building. 505 Deadrick Street. Open T-Sa 10-5, Su 1-5; Military Branch: T-Sa 10-4, Su 1-4), admission is free.

Travellers Rest Judge John Overton built his four-room frame house in 1799 on the burial mound of a Native American settlement. By the time of his death in 1833, the house had been expanded into a 12-room plantation house. 636 Farrell Pkwy. Open T-Sa 10-4:30, Su 1-4:30, admission fee. Historic marker.

Two Rivers Mansion David McGavock built this Italianate house in 1859. It was the jewel of a large plantation and remained in the family until 1956. 3130 McGavock Pike. The site is not open to the public on a regular basis, available for function rental. Historic marker.

Songbird Tours Part tour bus and part intimate music club, SongBird brings you the stars and stories behind Music City’s famous (and not-so-famous) landmarks, plus special one-night-only performances by Nashville’s best songwriters, live on our on-board stage. In a nutshell, it’s like The Bluebird Cafe* on wheels. SongBird Tours was founded in 2017 by Patsy Bruce and her son Trey Bruce, both acclaimed songwriters in their own right. The duo wanted to give visitors and locals alike a “songwriter’s-eye view” of Music City, highlighting the art form itself as well as the sites and stops where music history is made. Tours are given daily.

Let’s Go Travelin’ Music Row Walking Tours Walk in the footsteps of the stars and discover the stories of Music Row’s past and present. Elvis, Dolly, Carrie, Garth, Taylor, Luke they all either have or are currently recording here. Over 20 recording industry sites and the stories to go with them. Individual volume control listening devices for each person. It’s History, It’s Music, It’s Recording Studios…There is no place like Music Row anywhere and there is no other walking tour like this one. A portion of your ticket purchase supports the preservation on this historic music district. Day tours are given Wednesdays & Saturdays at 10am & 1pm and evening tours are given Mondays & Thursdays at 6pm.

Bicentennial Capitol Mall State Park Developed in honor of Tennessee”s 200th anniversary of statehood, the site was chosen to preserve the view of the State Capitol. Located between Sixth and Seventh Avenues North from James Robertson Pkwy. To Jefferson St. Guided tours by appointment, admission is free.

Centennial Park The site of the Tennessee Centennial Expo-sition, this park contains a full-size representation of the Parthenon (now a museum). West End and 25th Ave. N. Park open 6am-11 pm.

City Cemetery is the oldest public cemetery. The land was purchased in 1820 and the cemetery opened in 1822. It includes such notable Nashvillians as Gen. James Robertson and Capt. William Driver (who nicknamed the US flag “Old Glory”). 1001 4th Ave. South. Open dawn to dusk.

Mt. Olivet Cemetery Established in 1855, this cemetery hosts a wealth of Victorian tombs. In addition, there are the Con-federate Memorial, a pyramid designed for E.C. Lewis and a Gothic vault for Adelicia Acklen. 1101 Lebanon Rd. Open dawn to dusk.

Warner Parks With 2,664 acres, this complex is one of the largest municipal parks in the U.S. The stone gates at the Belle Meade Blvd. entrance and stone walls were constructed by the WPA. On site are the Nature Center and the C.E. Farrell Natural History Museum and Gardens. Open 6:30 am – 11 pm. Historic marker.

HNI invites you to attend an unforgettable evening of song, all benefiting our preservation work!... END_OF_DOCUMENT_TOKEN_TO_BE_REPLACED