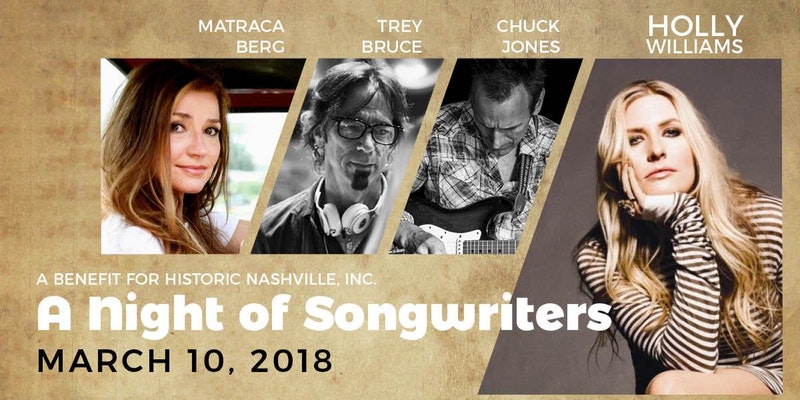 In celebration of its 50th Anniversary, Historic Nashville is hosting a fundraising event featuring a very special roster of songwriters in performance at the legendary Green’s Grocery in historic Leiper’s Fork.

In addition to the 90-minute concert featuring songs and stories from Matraca Berg, Trey Bruce, Chuck Jones, and Holly Williams, a BBQ dinner provided by Puckett’s Grocery and Restaurant and beer from Yazoo Brewing is included.

All proceeds from the event support the efforts of Historic Nashville including our advocacy, outreach, and programs aimed at preserving and promoting the historic places that make Nashville unique.

Cancellations will be considered an in-kind donation.

Matraca Berg is a three-time Grammy-nominated American country music singer and songwriter. Born in Nashville, she has released five albums and written many hits including “You and Tequila” for Kenny Chesney and “Strawberry Wine” for Deana Carter.

Trey Bruce is an Emmy award-winning American songwriter born in Memphis and currently living in Nashville. He has hundreds of cuts by artists like Lee Ann Rimes, Carrie Underwood, and ZZ Top. He is also a proud member of the Historic Nashville Board of Directors.

Chuck Jones is an American singer-songwriter and extraordinary guitarist from Memphis. He has written many hits over the years for the likes of George Strait, Diamond Rio, and Chris LeDoux.

Holly Williams is a singer-songwriter born in Nashville. She has been making records and touring the world to wildly positive critical acclaim for most of her life. She has toured with Lucinda Williams and Bob Dylan and is a passionate preservationist.

Historic Nashville, Inc.’s Annual Membership Meeting is an opportunity to meet and mingle with other... END_OF_DOCUMENT_TOKEN_TO_BE_REPLACED