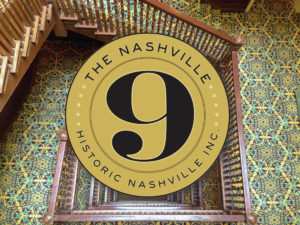 Walker, who now calls the Nashville area home, is a local recording artist, songwriter, and record producer, as well as a passionate preservationist.  Best known for his work in punk, pop rock, and hard rock genres, Walker operates a music recording studio on Music Row.  In recent years, Walker and his band, the Black Widows, have toured with rock bands such as Train and opened for Pink.

The 2016 Nashville Nine was nominated by members of the community and represents nine historic properties threatened by demolition, neglect, or development.  These properties will be the focus of Historic Nashville’s advocacy and outreach throughout the coming year.

Historic Nashville works to promote and advocate for the recognition of historic places and the impact they have on the culture, commerce and creativity of the city.  Over the years, Historic Nashville has successfully assisted in the preservation of numerous landmarks such as the Ryman Auditorium, Union Station, and the Hermitage Hotel.

For buildings on this year’s list, Historic Nashville will work with the owners, government agencies, and the public to educate, evaluate and create solutions for preserving these important elements of Nashville’s unique history and sense of place.

HNI invites you to attend an unforgettable evening of song, all benefiting our preservation work!... END_OF_DOCUMENT_TOKEN_TO_BE_REPLACED